It’s the time of the year as fashion month is wrapping up, marking the change in seasons from Spring/Summer to Fall/Winter (despite designers debuting looks for the opposite time of year). But frankly, I don’t care too much for fashion week/ month. While I, of course, have a great interest in fashion, it’s always been more at the individual level.

The fashion weeks, to me, are exciting, yes, influential (obviously), but I take them to be more like an art exhibit. I’ve never been one for trends so I don’t look at the fashion weeks as a compass to guide my selections for the upcoming seasons. Fashion, to me, is deeply personal and I bristle at the idea of letting anyone else, high fashion included, dictate my style.

I have no doubt that the couture houses, high fashion labels, and of course publications like Harper’s and Vogue have an enormous influence on the fashion industry and that influence, I’m sure, trickles down into the clothes at TJ Maxx. But what this scene from The Devil Wears Prada brings up is the age-old question of fate vs free will (at least in the context of the fashion industry).

What is Haute Couture?

Haute couture, couture, and pret a porter each have their place in the fashion world and each has its own influence.

Haute couture refers to a protected class of design houses and is regulated by the Syndical Chamber for Haute Couture in Paris. The design houses have certain standards that must be met in order for them to be considered couture. Just like any ol’ body can’t call themselves a doctor, not just any brand/design house can call themselves haute couture (at least in France). Haute couture pieces are the items we see which are literal works of art- the things that no one wears beyond a runway or red carpet and they are oftentimes designed and made specifically for the wearer, no one else. Think Zendaya’s chainmail dress by Versace at the 2018 Met Gala.

Couture is clothing that is made to measure. If it comes from a haute couture design house, then it is haute couture. Back in the day, couture was much more widespread. Designers would create their collections and then customers would select which design they liked. The design would then be made according to the customer’s measurements. The best example is from How to Marry a Millionaire in which Marilyn Monroe, Lauren Bacall, and Betty Grable play characters who work as fit models for an atelier. In the movie, the character Tom Bookman comes into the fashion house and watches as the ladies model the house’s collection. In the movie, the fashion house was pret a porter but it could just as easily have been couture. If it were, and Tom wanted to buy something “for his aunt,” the house would then begin constructing one of those designs according to the measurements of the intended recipient. With the loss of home sewing, made to measure clothing is a rare thing these days and when one cannot sew for themselves, having a garment made by someone else can be expensive.

Pret a porter is ready to wear clothing. This is the clothing that the vast majority of people wear, especially on a day to day basis. They are called “ready to wear” because they are ready to wear as soon as you decide to buy it, as opposed to couture, which is made to measure and requires multiple fittings. Aside from being significantly less expensive, pret a porter will not fit as well as a couture piece simply because the sizes on ready to wear clothing are graded (aka scaled) up or down based on the averages from fit models. Averages are great for making clothes that need to fit relatively well on a vast number of consumers but 99% of people do not have perfectly average measurements in all areas of the body.

What we see on runways and red carpets often dictates what’s sold in stores. But due to laws of supply and demand, trends are also started from the consumer up, especially with the advent of influencers. So either way, it’s likely that your clothes were in fact “chosen for you,” whether by the designers or by popular demand. 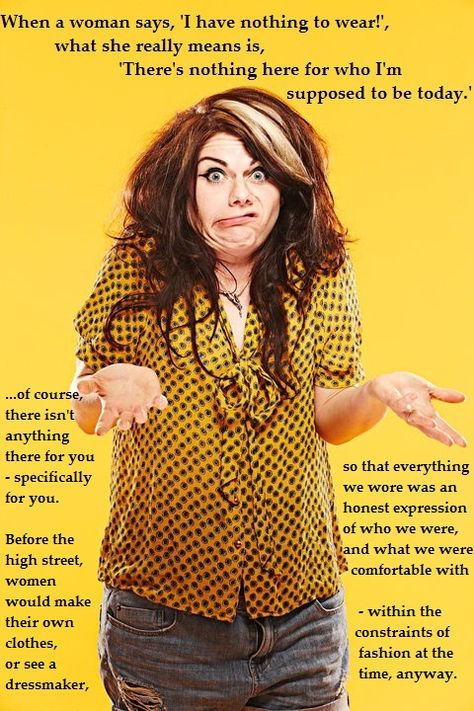 For the past few years, in my quest for the perfect closet, I have found it nearly impossible to find clothing that I truly love, save for one Italian brand that is far beyond my current budget, even on sale. Aside from undergarments and work clothes that I wear only at work, I can count on one hand the number of clothing purchases that I’ve made in the past year. I don’t mean to sound haughty or “enlightened” but whatever hoodoo the fashion industry uses to enchant consumers with trends hasn’t been working on me. The things I see in stores don’t excite me. I often dream of going on a Carrie Brashaw-esque full-day shopping spree and being able to come home with multiple gorgeous finds in big glamorous shopping bags. It’s not that everything I see is ugly (although that can be part of it sometimes), it’s more so that the clothes available don’t feel congruent to the person that I am or the person who I want to be.

Perhaps that’s why I feel more ambivalent about fashion week than what would be expected from a fashion blogger and future fashion student. Just because I admire a beautiful piece of art in a gallery (and I love art galleries) doesn’t mean that I would want it in my home and that it would look good on my wall and suit the aesthetic of my living space. So in that way, I do feel as though I might be “exempt from the fashion industry,” although exempt isn’t the right word; I’d say excluded is the most accurate that I can come up with. And I think a lot of people can feel excluded from fashion whether it’s due to race, weight, height, etc. I’m not saying that being unable to find styles that I like is on the same level as any of those things but the point is that, for whatever reason, fashion can feel frustrating and impersonal- like it has nothing to do with me.

Nevertheless, I’m still obsessed with fashion. Maybe not with the runway shows and the big couture houses, the magazines, or even shopping, but I’m obsessed with my fashion. As selfish and self-absorbed as that sounds, it’s why I blog about it. More than that, it’s why I rarely speak prescriptively about fashion; it’s why I don’t make lists of “Must Have Wardrobe Staples.” And I know I can’t be the only person who feels this way about clothing but I find it hard to talk about this with other fashion lovers. IRL, you wouldn’t pick me out of a crowd as a “fashionista” or as someone who is particularly put together on most days. I’ve donated a lot of my clothing and what’s left are the uber-casual “basics”- tank tops, sweatshirts, yoga pants. So it’s fair to say that I’m not a particularly fashionable person. The difficulty of saying to other people that I don’t like most clothing I see comes from feeling as though I don’t have enough “credibility” to declare 90% of clothing unsatisfactory. After all, how could a 19-year-old in slip-on Sketchers, yoga pants and a baggy sweatshirt from a college she didn’t even go to have “good taste?”

The things is though, fashion has everything to do with me. When it comes to personal style, you are the expert on yourself. And when the goal of clothing is to express who you are, the less “noise” and outside influence there is to interfere, the better. The biggest challenge of personal style is knowing who you are and what accurately expresses your essence. In my case, it’s very easy to see what doesn’t work, but finding- or better yet, creating- a style that does work is a lot harder. Having a totally free will in fashion is nearly impossible; we will always pick up on the influences of others and even a rejection of certain styles reaffirms their importance. But that doesn’t mean anyone has to be completely at the mercy of what trickles down to the stores. Having the budget for bespoke clothing certainly helps, but so does knowing your best colors, spotting your most common fit issues and learning how to avoid or correct them and of course, learning to sew or finding a good tailor.

So what is the big deal about haute couture, really? I think that maybe I have such an atypical view of fashion and personal style that I can only guess. The thing about couture from my perspective is that it gives consumers an ideal to strive for. It sets the standard if you will. So when designers debut their new collections, people take notes, often literally.  When the standard is set by the design houses, it’s a lot easier to take notes and copy the recipe than it is to really find your own style “from scratch,” if you will. As much as fashion can be about self-expression and individuality and art, it’s also about our fundamental social inclusion needs as humans.

And again, I don’t mean to sound “above anyone else,” but I can’t help but wonder if obsessively chasing trends and taking fashion cues from everyone and everything else and only then asking if you like it or if it suits you last of all, then maybe such a person isn’t in touch with who they really are.